Each year, crowds flock to the Detroit International Auto Show to catch a glimpse into the future.  Some attendees are focused on their immediate futures; they are eyeing this year’s models and are planning their next purchase.  Others go to experience a further and more fantastic future hinted at through the show’s concept cars.  A video tape in our collection prominently features several of the concept cars which captured the imaginations of attendees to the 1989 North American International Auto Show.  29 years later, we know how things turned out; our world is now one of wireless connectivity, self-driving cars, and alternative fuel technologies.  However, the designs on display at the 1989 North American International Auto Show reflected aspirations for a tomorrow of humanoid robots, lasers, broad curves, neon colors, and—surprisingly—beach parties.

Judging from Mayor Coleman A. Young’s speech at the show’s ribbon-cutting included at the beginning of the tape, the bold futurism on display matched a general sense of optimism.  Despite this being the first year the former Detroit Auto Show had fully embraced foreign manufacturers by re-branding itself as the North American International Auto Show, Young proclaimed that “Detroit is back, the American automobile industry is back, and we lay claim right here and now to a continued capitol of the automobile industry of the world.”  After the ceremony, blue lasers danced above the heads of attendees.

Seethru-P-O. shows off the Dodge Spirit.

Inside the show, the camera crew soon finds the Dodge Spirit display.  Although the Spirit was a brand new model for 1989, it was perhaps upstaged by the animatronic robot with which it shared its display.  Dubbed Seethru-P-O., this humanoid robot was outfitted with a boxy television screen in its torso, large eyes, translucent limbs, and articulated clamp-shaped hands.  Seethru-P-O. may have been an attempt to place a friendly and exciting face on the much more mundane industrial robots which had been proliferating along the auto industry’s assembly lines throughout the decade.

The Ford Segaro concept may have been twenty years ahead of its time.

The first concept car to appear on the tape is the Ford Segaro.  While the nearby Ford Aerostar minivan offered a more realistic preview of what the 1990s were to bring, the Segaro in retrospect would not be too out of place on the roads of the 2000s.  Outfitted with seating for seven, a hatchback, and a broad track, the Segaro was an effort to bridge a sport utility vehicle with a sports car years before the “crossover” would become an established market.

Chevrolet’s XT-2 concept drew upon an iconic vehicle of the company’s past, the El Camino.

Chevrolet was also blurring classes with their XT-2 concept.  The turntable on which the XT-2 was filmed at the 1989 auto show offers a wonderfully dramatic introduction to the vehicle.  Head-on, the XT-2 resembles a futuristic sports car, with a short, curved front-end below a large dome-shaped windshield.  As the XT-2 continues to rotate, it presents a surprise—a pick-up bed comes into view.  The XT-2 is revealed as a sleek descendant of Chevrolet’s own El Camino.  As the XT-2’s rear end rotates into view, a large blinking Chevrolet logo on its tailgate punctuates the impression.

A picnic table, an umbrella, beverage coolers, and a vacuum cleaner were among the features packed into Pontiac’s Stinger concept.

Elsewhere on the show floor, Pontiac hoped to catch the attention of outdoors enthusiasts with their Stinger concept.  Resembling a bright green futuristic dune buggy, the Stinger featured glass windows in the lower portion of its doors, which were intended to be replaceable with special panels containing beverage coolers.  Those cold drinks were but one part of the beach party in which its designers envisioned the Stinger as the centerpiece.  Among its many accessories, the car was also to feature a fold-out picnic table, an umbrella, a camp stove, and a vacuum cleaner to keep the seats sand-free.  While the Stinger never went into production, echoes of this feature-heavy outdoorsy oddity can be found just over a decade later in Pontiac’s Aztek. 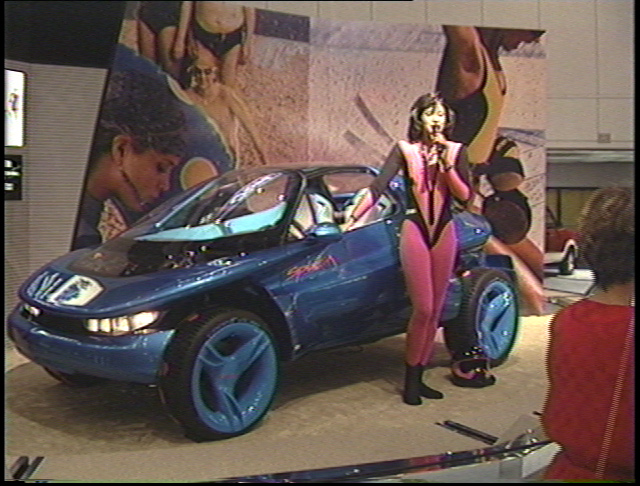 The Ford Splash’s seats were upholstered in the same material used to make wet suits.

Dune buggies were apparently in vogue in 1989, as Ford’s Splash concept fell into in a similar vein to the Stinger.  The Splash sprung from the drafting table of a team of Center for Creative Studies students, who were tasked with designing a summer-centric vehicle which would still be suitable for all seasons.  The Splash could be reconfigured depending on the weather—in additional to removable windows and a roof, it also featured retractable mud flaps.  Befitting its name, the interior was also designed to withstand the spray of the ocean or passengers’ soggy swimsuits; in the video tape, the woman presenting the Splash in the video wears a wet suit to call attention to the Splash’s neoprene upholstery.

The break-out star of the 1989 show was the Dodge Viper concept.

While many of the concept cars featured at the 1989 show are obviously just that—fanciful explorations of concepts which might inform elements of practical production vehicles—one of them feels almost inevitably bound for the roads of the 1990s.  The camera operator of our tape initially has trouble getting a shot of this car, as it is completely surrounded by a wall of spectators.  After the operator hoists the camera high above head-level, a now familiar red shape comes into view—that of the Dodge Viper.  The 1989 North American International Auto Show was the premiere of the Dodge Viper concept.  The Viper proved so popular here, that it went into production nearly unchanged in 1992.  Dodge’s Viper was one glimpse of the future which proved to not be so distant.