Do you like sitting on the left side of your car? How about shifting with your right hand? These patented designs, along with 63 others, came to market courtesy of Charles Brady King. During a long career of successful inventing, King drove the first gasoline car on the streets of Detroit. But what led up to that drive?

An epicenter of activity in the early 1890s was in an around John Lauer’s Machine Shop at 620-626 St. Antoine Street. At this location, just north of Congress Street, one could find top-quality tooling and skilled machinists filling work orders for stalwarts like the Edison Illuminating Company. 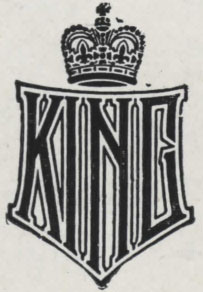 In 1894 one could also find Charles Brady King, a renter, busily working in his second floor drafting room. It was here that he founded the Charles B. King Company, drafting designs for pneumatic tools, marine and automobile engines from 1894 to 1902.

By 1895 King had money in his pocket from award-winning patented inventions confirmed at the 1893 Chicago World’s Fair. King used this patent money to help fund the design and production of the first block-type inline four-cylinder engine. The engine weighed 130 pounds, and its design is still in use today.

After King finished testing one of his block engines, he had his assistant Oliver Barthel run two of the valves over to 58 Bagley Avenue. There a needy friend, Henry Ford, was putting together something in his back shed. Ford also later accepted a drive chain ordered by King from the Indianapolis Chain Company. With King’s help, Ford continued work on his own design, a two cylinder “Quadricycle”. 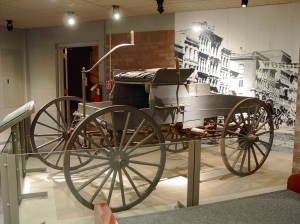 A replica of King’s 1896 vehicle can be seen on display in our America’s Motor City exhibit.

Once King’s four-cylinder engine was ready, it was off to the races! The Chicago Times-Herald race that is, from Chicago to Evanston, Illinois and back. King had his four-cylinder engine ready and he was an entrant in the race, but he did not complete his car by race day, November 28, 1895. At “America’s First Automobile Race,” King had to settle for an umpire position. He still saw action by commandeering a car for a weather-beaten unconscious driver named Oscar Mueller. King arrived through the foot deep snow propping up Mueller for a second place finish. The blistering average speed for the Mueller-Benz car was 4.87 MPH.

Charles Brady King at a historical marker dedication in his honor, 1946.

Once back in Detroit, King went to work on a loaned delivery wagon carriage sent from the Emerson & Fisher Company of Cincinnati. It was to this carriage King added his four-cylinder engine, foot speed controls, gas and water tanks, Hyatt bearings and a muffler. By late winter 1896, King was ready with this design. The attention a horseless carriage drew dictated it be run in the overnight hours. Starting March 1, 1896 King was wheeling his machine out of Lauer’s shop and making regular night test runs to avoid the “unfavorable publicity”. The press soon caught on and King conceded that on March 6, 1896 around 11:00 PM was the official date and time of the first horseless carriage to drive the streets of Detroit. The Emerson & Fisher carriage would soon be dismantled and shipped back to Cincinnati.

5 thoughts on “Charles B. King”