Know Your Hats: A Quick History of Men’s Hats 1790 to Present

The Detroit Historical Society Collection is home to approximately 1,800 hats: Men’s, women’s, children’s, winter, summer, military, formal, casual, etc. These function as a critical part of the larger Costume and Textile collection which, at 20,000 artifacts strong, is the single largest grouping of objects in our holdings. A good chunk of the 1,800 hats were sold from Detroit department stores or were created by local designers, but the majority of them were collected to serve as representatives of certain periods and styles.

Despite the subtle differences outlined below, the men’s hats in the collection are the easy ones to separate into distinct styles; the ladies’ head fashions are a little tougher to parse out. Regardless, we’ll start with some easy ones.

Top hats owned the 19th century, and no history of men’s hats would be complete without them.  Like automobile fins in the 1950s, top hats started out relatively small in the 1790s, grew gaudily large, and then shrank again. While auto-fins disappeared completely, one can still spot top hats being worn on occasion, mostly at weddings or high school formals worn by those wishing to make a statement, ironic or otherwise. So dominantly popular in the 1800s, it stands to reason that there would be some carry over into the 1900s, and there was, but mostly among the elderly and affluent. However, in context with the rest of the fashion world, the fact that the top hat is still being worn more than 200 years after its inception is astonishing. But all top hats were not created equally.

Above Left: The Wellington-style top hat, popular from the early to mid 1800s. The curled brim and flare at the crown are hallmarks of this style. DHS Collection
Above Right: The stove pipe: flat brim, taller, and almost perfectly cylindrical. Most popular in the mid 1800s. Forever associated with Abraham Lincoln, had the
6’4″ president worn this hat, he would have stood an even7 feet tall. DHS Collection

Below: The “opera hat;” introduced in the 1840s, this style of collapsible hat could fit under your theater seat. This example is from just after the turn of the 20th century. DHS Collection

The story of fashion in the 20th century is the gradual shift from formal to casual. The top hat fell victim to this change once the more formal knee-length frock coat was gradually replaced by the “leisure suit,” or modern men’s business suit. This shift sent the top hat out and ushered in the 20th century hats we know and love to confuse: the homburg, fedora, trilby, and porkpie, as well as the more distinctive derby and boater. In order to nail down the differences between these styles, we will show our work with images of the hats themselves, images from the DHS collection of people wearing examples of each throughout Detroit History, and a pop-culture use so you can wow your friends by spotting them out in the wild.

Most popularly worn with a lounge suit between the 1880s and 19-teens, the difference between a bowler and a derby depends on which side of the Atlantic you are standing. If you call it an elevator, this hat is a derby; conversely, if you call it a lift, it is a bowler. This style is likely still recognizable to a number of 21st Century-types because of the famous Brown Derby Restaurant in Hollywood, shaped like its namesake. Also, the hat looks like a bowling ball. Your great grandfather probably upset your great-great grandfather by wearing this out instead of a top hat. 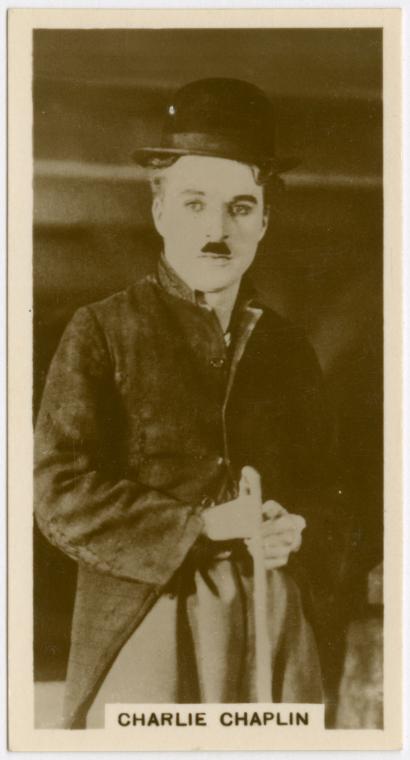 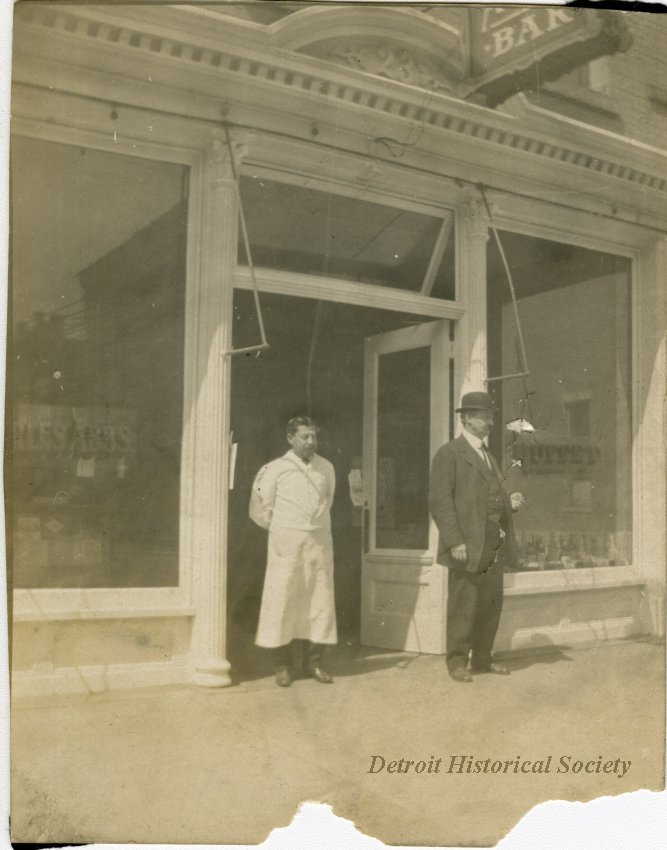 After WWI the derby’s popularity had dropped off and the boater was much more in vogue. Made from straw, boaters were obviously much cooler (temperature-wise) to wear with a full suit in the summer. While they began to fade in popularity in the 20s, they had a brief revival in the late 1930s. 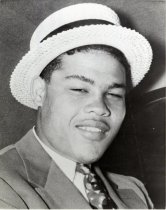 From Fiona Clark’s Hats: “it is remarkable that the twentieth century […] has produced no new style of hat which enjoyed any lasting popularity.” Because of this, all of the hats lumped together in this section were worn simultaneously, making a timeline of their popularity difficult to discern. They all enjoyed some popularity between roughly 1930 and the present.

Like a top hat, homburgs are made of a more rigid felt so their brim is locked into the “gutter curl” configuration shown below.  It does share traits with traits with the triblys and fedoras of the world (described below), but is easily distinguished by the brim and v-shaped top divot. 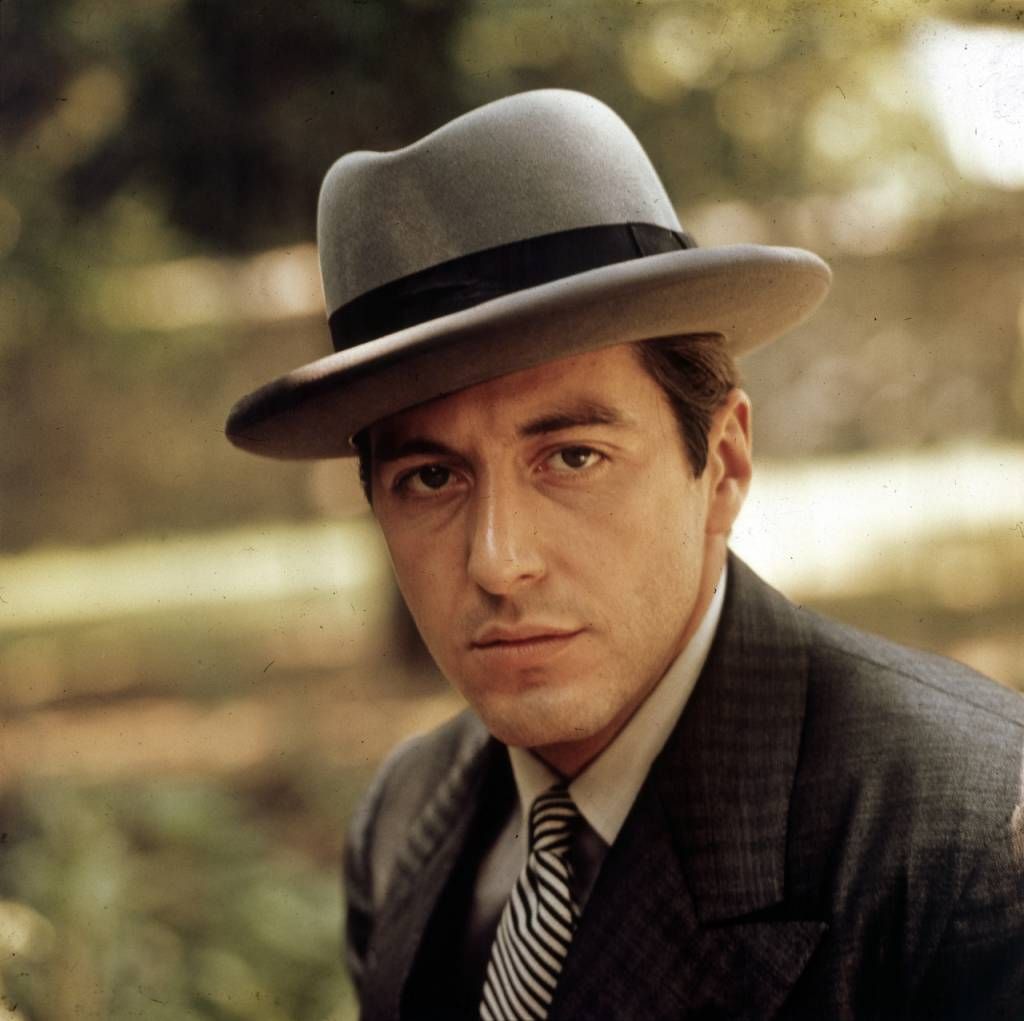 Above Left: Celebrity in a homburg: Al Pachino as Michael Corleone in
The Godfather (1972).
Above Right: Actual homburg: circa 1940, DHS Collection
Below: Homburgs in History: GM Chairman of the Board Alfred P. Sloan next to a hatless Mike Gorman, Editor of the Flint Journal, reviewing Pontiac’s
1936 lineup. DHS Collection 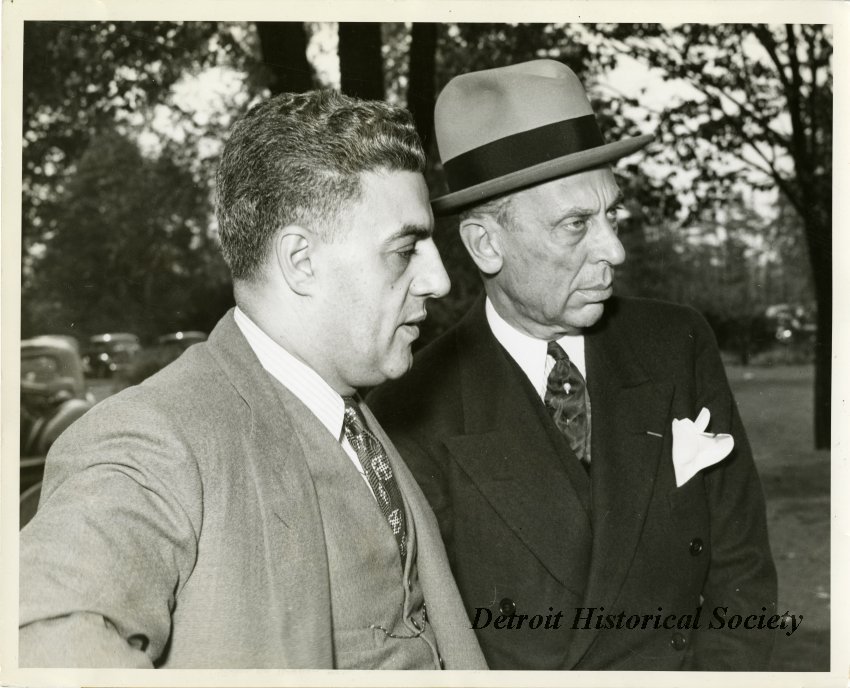 Often confused with the trilby (described below), what sets the fedora apart from its smaller counterpart is that fedoras have a wider and softer brim. While many fedora wearers choose to pull the front down, and turn the back up, in a trilby-like fashion, the hat is not locked into this configuration. Fedoras feature a teardrop shape indentation in the crown which allows for a more pointed and narrow front profile and side indentations. The fedora is meant to be worn further toward the front of the head and help shape the wearer’s face. It was most popular in the 1930s and 40s.

Above Left: Celebrity in a fedora: Harrison Ford as Indiana Jones in Raiders of the Lost Ark (1981).
Above Right: Actual fedora: Sold by the J.L. Hudson Co., c. 1950. DHS Collection.
Below: Fedoras in History: Photographer Phil Dion of the Detroit Times, 1945. DHS Collection

The trilby met the demand for a lightweight hat that was not as easily crushed as the boater. The main features of the trilby are a relatively narrow brim (much narrower than a fedora) that has the front pulled down and the back turned up. Their brims are semi-still, meaning they are more or less locked into this down-in-front-up-in-back configuration. Like a fedora, the trilby also features a crease down its top center and indentations on the sides that bring the front to a point. Trilbys are meant to be worn further back on the head. The trilby (and it cousin the tyrolean) enjoyed an uptick in popularity in the 1950s and 60s when the fedora was nearly out of style. Above Left: Celebrities in trilbys: Dan Akroyd and John Belushi as Elwood and Jake Blues in The Blues Brothers (1980).
Above Right: Actual trilby: A Dobbs-brand trilby sold from Detroit’s Hughes and Hatcher, c. 1950. DHS Collection.
Below: Trilbys in History: Detroit Boat Show, 1958. The man in the center bottom of the frame is sporting his white trilby, near a mustachioed man in a dark homburg. DHS Collection

The brim of the porkpie is stiff and curled all the way around like the homburg, but the porkpie creates some separation from its ancestor because its crown has a permanent gutter running all the way around, creating a fixed oval or teardrop shape to the top. porkpies reached peak popularity in the 1960s and carried on into the 70s, but are experiencing a small resurgence relative to other “old” hat styles.

Above Left: Celebrity in a porkpie: Bryan Cranston as Walter White in Breaking Bad (2008 to 2013).
Above Right: Actual porkpie: Soft felt version sold from Hudson’s Men’s Store, c. 1960. DHS Collection.
Below: Porkpies in History: Pit area of the 1967 World Championship Race on the Detroit River. On the left (white coveralls and pork pie) is Shirley McDonald, owner of the hydroplane NOTRE DAME, 1967. DHS Collection

Fashion historian Fiona Clark lamented the fact that no 20th century style of hat has enjoyed a lasting popularity. Her book Hats was published in 1982 and never saw the popularity of the baseball cap coming. For nearly 50 years and counting, the simple baseball hat has been the dominant form of men’s headwear.

When compared to 19th century dress, the business suits and fedoras of the 20th century appeared casual. 21st-century dress has only become more casual, so it makes sense that our headwear would follow suit.

The origin of the baseball hat dates to the mid-1800s as a soft cap with a stiff brim that acted as a sun visor. The hat’s full potential was realized in 1901 when our very own Detroit Tigers put a logo of a running tiger on the front of their caps, essentially turning the sunshade into a billboard.

Above Left: The Tigers were the first Major League club to put a logo on their hats. This rendering of their 1901 uniforms is from the National Baseball Hall of Fame’s Dressed to the Nines virtual exhibit. The team added the “Old English D” to their hats in 1904.
Above Right: Modern version of the 1901 “running tiger” logo. 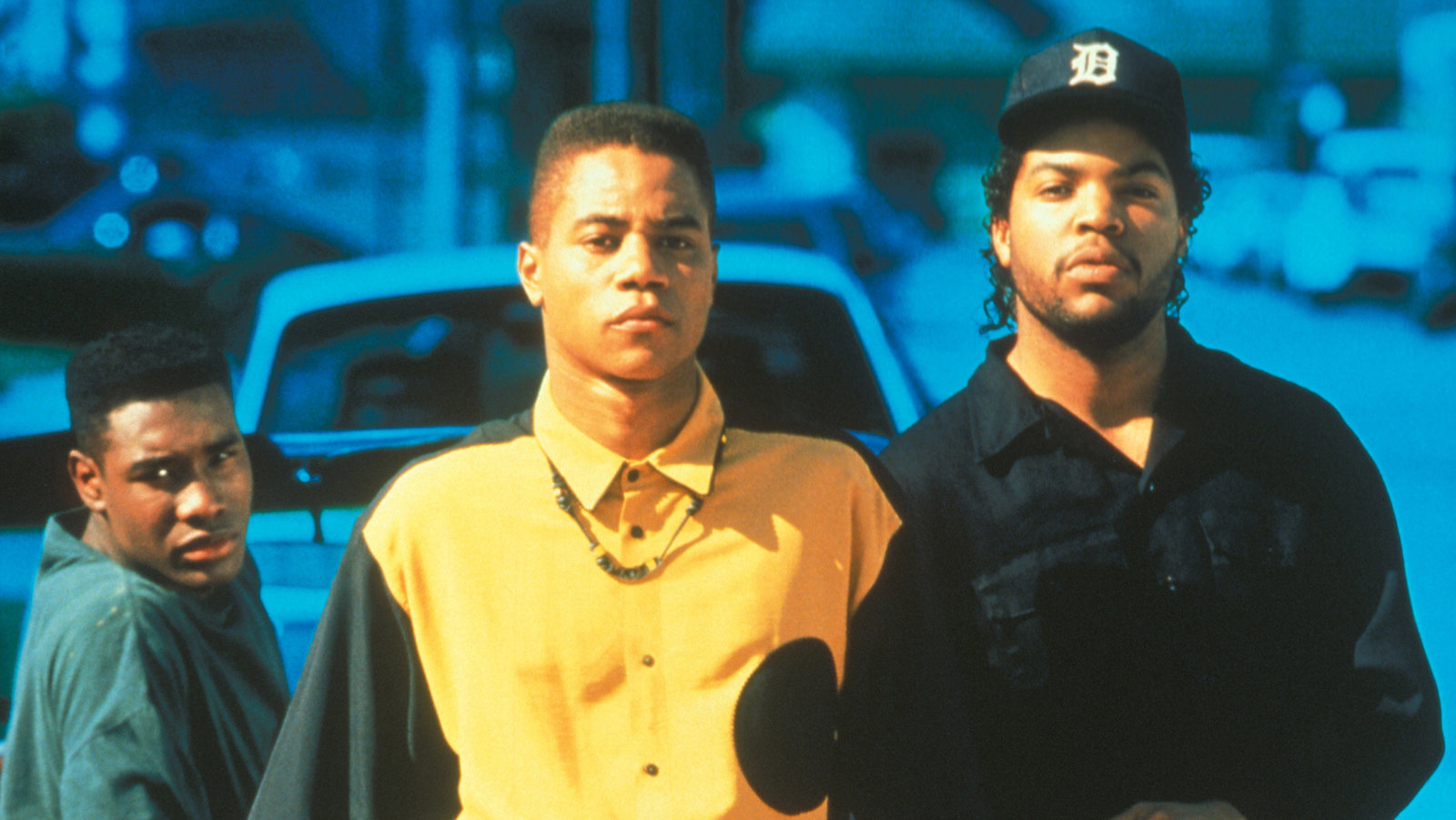 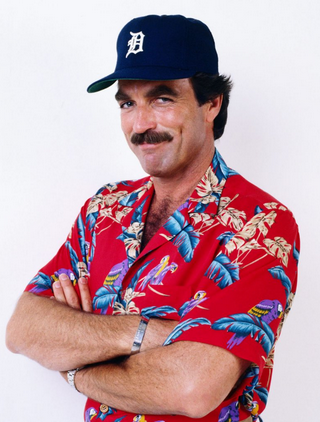 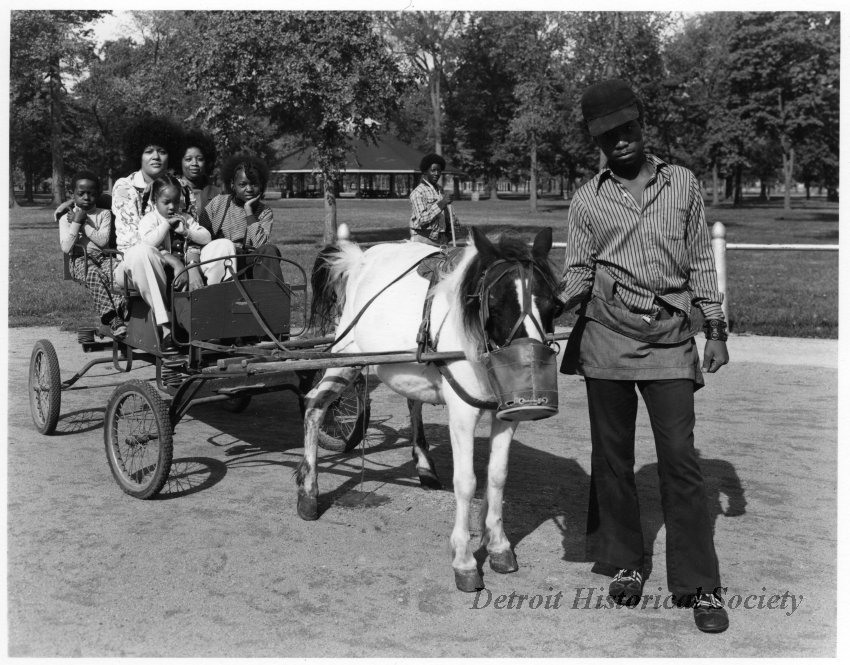 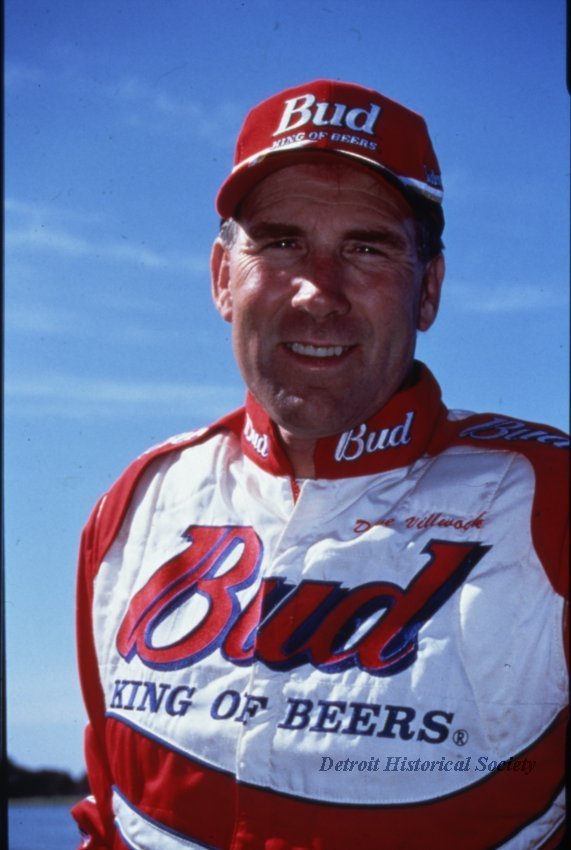 What it lacks in style, it makes up for in adaptability. Operating like a bumper sticker for the head, seemingly everyone can find one to suit their interests. Recently lauded by Vogue Magazine as “America’s National Hat,” the baseball cap is only getting more popular and isn’t going away any time soon.

4 thoughts on “Know Your Hats: A Quick History of Men’s Hats 1790 to Present”