I’ll Be There For You, When You Can’t Find the Door?

Nestled within the archives of the Detroit Historical Society are a pair of surprising pop culture artifacts–copies of the draft lyrics for both the theme song of the 90s T.V. hit Friends, and for the Pointer Sisters’ 1984 single “Neutron Dance.”  The Detroit connection for these two songs may not be readily apparent to many, but if you check the sleeve of your well-worn copy of the Pointer Sister’s album Break Out, and pay close attention to the end credits of Friends, you’ll find the common factor is proud Detroit native Allee Willis.  Willis’ signature works may be her collaborations with Earth, Wind, and Fire, including their funk classic “September.”  However she has worked with a myriad of other artists, ranging from Bonnie Raitt to DMC, and Patti LeBelle to the Del Rubio Triplets.  In fact, you very well may have recently joined Willis as one of the 5,000 Detroiters who contributed their voices to her recent anthem for the city, “The D,” which she recorded over the course of five years at various events across the area, including stops at both the Detroit Historical Museum and the Dossin Great Lakes Museum.  Willis, hot on the heels of being honored with a Distinguished Detroiter award at the 2018 Detroit Music Awards, agreed to answer a couple questions for our blog about the draft lyrics, her creative process, and her other works.

Across 27 typewritten pages, the lyrics to what eventually would become the 45-second Friends theme, “I’ll Be There For You,” reveal an involved process.  Willis began by working directly from the show’s pilot; “I watched the pilot and wrote down every characteristic of every character and then tried to make up lines about them.”   From these concepts flowed a litany of possible frustrations felt between the characters—ranging from dealing with the smells of second-hand aroma therapy to the tolls of freeloading roommates—contrasted with the now iconic affirmation of support expressed in the chorus.  Willis explained, “when you’re writing for something so specific as a TV theme you try every possible permutation of every line that you like. The only thing the producer of the show told me was that the title was to be ‘I’ll Be There for You.’ So I had at least 25 different choruses to sing for the producers with that line in it and at least 50 verses when I presented it to them.” About these unused lines, she continued, “if a line is really great and doesn’t get used in a song I catalog it and usually end up using it in something else. But the Friends lyric had to be so specific and so simple that I didn’t save any of those lines for further use.” 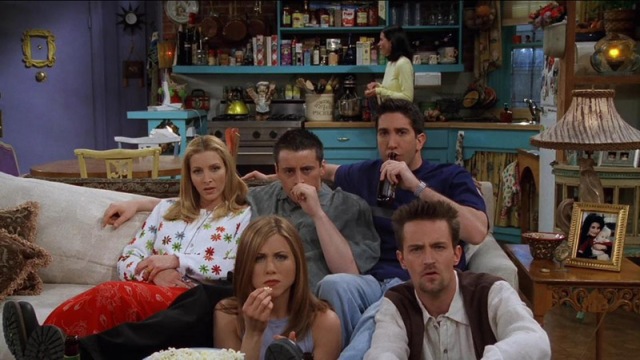 With Willis’ lyrics to set the tone, Friends drew millions of viewers each Thursday between 1994 and 2004.  Image courtesy imdb.com.

Reading the drafts today, there’s almost a sense of inevitability each time one of the final lyrics first appears.  Willis describes how these breakthroughs played out during the writing process; “The first line I got that I knew was a keeper was ‘Your job’s a joke, you’re broke, your love life’s DOA.’  I always liked internal rhymes, especially on long lines.  And the ‘A’ in ‘DOA’ is a great syllable to hold if the note is long. Second one I got that I knew was a keeper was ‘Well it hasn’t been your day, your week, your month or even your year.’  Something was falling apart in the lives of all the characters and I liked making a play on a common phrase.”

In her notes, Willis mentions performing early versions of the theme for the show’s producers on the studio lot.  While reading the lyrics, it’s tempting to attempt to sing along yourself to see how these early drafts might have sounded.  When asked if these nascent versions of the theme followed the now familiar final melody, Willis responded, “The melody, written by Michael Skloff, remained the exact same from the time it was written to what we ended up with. I usually write both music and lyrics but I needed one more song to fulfill my publishing deal, which I was eager to get out of. So I agreed to just write the lyric. I never expected it to be a hit.”

Willis’ “Neutron Dance” is widely remembered for scoring the chase through the streets of—appropriately—Detroit near the beginning of the 1984 classic Beverly Hills Cop.  However it was originally conceived for a very different movie, Walter Hill’s cult “rock & roll fable” Streets of Fire.  Befitting that film’s bleak yet musical retro-futuristic setting Willis bridged the concepts of 1950s doo-wop with nuclear devastation, and brought in a bit of her own experiences.  Willis elaborates, “I hadn’t seen Streets of Fire before writing the song but was told that people were trying to escape a nuclear holocaust. So I knew that the hook line had to have something to do with fire, explosion, or nuclear something.”

Even within that premise, Willis made the song’s themes personal and easily relatable.  She reveals, “The entire song was written in under an hour. It was very autobiographical. It was the first time in years that I had gone without hits and I wanted to write a song about not giving up and that if your life isn’t working it’s up to you to make a change. Someone could push the button tomorrow and we’d all be up in smoke so get off your ass and do something—i.e. Do the Neutron Dance. When we (co-wrote with Danny Sembello) finished the song in 58 minutes we had everything but the title.”

Willis brainstormed a series of concepts evocative of nuclear war, before settling on “Neutron Dance.”

Among the photographic reproductions of her handwritten notes, Willis included the page where she brainstormed possible titles; “As a working title we had ‘I’m just burning on the barbecue.’ I knew the ‘I’m just burning’ was right but knew ‘barbecue’ couldn’t stay, especially because the song wasn’t about barbecue. I kept wanting to use the word ‘neutron’ and was driving down the 405 freeway in LA one day and the words just popped into my head like a glowing neon sign. ‘Neutron Dance’ seemed appropriate as it got the burning point across but added some fun with the use of the word ‘dance’.”  Willis explains that the song was “thankfully rejected” from Streets of Fire, and instead recorded by the Pointer Sisters.  It was this version which made its way onto the Grammy-winning Beverly Hills Cop soundtrack.  Perhaps as an auspicious sign, in that movie, Eddie Murphy’s Axel Foley sports a t-shirt from Mumford High School, Willis’ alma mater.

Beverly Hills Cop opened with a chase through the streets of Detroit set to the Pointer Sisters’ “Neutron Dance.”  Image courtesy imdb.com.

Of course, I also had to ask Willis about the endearing legacy of “September.”  Every September 21st, the song leaps back to the forefront the popular consciousness, making its presence known both over the radio waves, and in recent years as a trending topic on social media.  Was this annual relevance by design?  And just what was the significance of that date anyway?  Willis explained, “The only thing I knew about September when I started writing it with Maurice White, who had already started the music with the Earth, Wind & Fire guitar player Al McKay, was that he wanted ‘September’ as the title. We wrote it the first day we met. We tried singing every date of the month but the 21st felt the best. I only found out a month ago from his wife, almost 40 years after the song was written, that September 21st was the due date of their son. But at that time as far as I knew it was just the date that sang the best.”

Along with the lyrics, Willis also donated copies of several records that she worked on, including this 45 of Earth, Wind & Fire’s “September” from 1978.

Last month, ahead of schedule, September became a topic of hot debate when Taylor Swift released a fiercely maligned country-tinged cover of the funk classic.  Willis was initially supportive of news of the cover, but her response became more measured upon hearing it.  Willis has promised to address the controversy in her upcoming performance, “Allee Willis Loves Detroit,” at the City Theatre on May 18th and 19th.  When asked for a hint as to how she’ll be tackling the Swift situation, Willis shrewdly responded, “For that you’re going to have to come to the show! No teasers. I will just say that the show is very very funny, stuffed with hits, filled with detailed stories about how the songs were written, I auction off stuff from my vast pop culture collection, and I guarantee it’s unlike any other songwriter show you seen before. And I talk about Taylor Swift. Prepare for a wild evening!”