Hart Plaza’s sign invites attendees to “Dance to the Beat of Detroit Techno” at the 2002 Detroit Electronic Music Festival.

Visitors to the Detroit Historical Museum expect cars, and recently in our Automotive Showplace we’ve displayed the Scripps-Booth Bi-Autogo, the Stout Scarab, and the 1963 pre-production Ford Mustang Prototype—but what about “Cosmic Cars?”  The 1983 song by Detroit’s Cybotron got people around the globe moving to a futuristic beat and was the introduction of many to the emerging genre of Detroit Techno, a style which eventually laid much of the groundwork for the modern age of electronic dance music.  In fact, between January 2003 and August 2004, the Detroit Historical Museum housed the special exhibit “Techno: Detroit’s Gift to the World,” and indeed, a copy of Cybotron’s “Enter,” the classic album which featured “Cosmic Cars” was displayed right beside the exhibit’s entrance. The godfather of techno, Juan Atkins, glances up from his decks during his Saturday night set on the main stage at the 2002 Detroit Electronic Music Festival.

Cybotron was an early project of Juan Atkins, a man dubbed the godfather of techno, and one of the Belleville Three.  In the 1980s, Atkins, along with fellow Belleville residents Kevin Saunderson and Derrick May inspired by their eclectic variety of music played by radio D.J. The Electrifying Mojo, and equipped with a new generation of synthesizers and drum machines, began shaping Detroit Techno.  The burgeoning scene grew to include Eddie “Flashin’” Fowlkes and Jeff “The Wizard” Mills, and the sound began to catch on as far away as Europe.  In the 1990s, Detroit’s Carl Craig became the new face of the genre.  Meanwhile, as the echoes of the sounds first heard in Belleville basements and small Detroit clubs began to reverberate into mainstream pop music, the artists of Detroit-based collective Underground Resistance sought to restore the early renegade edginess of Detroit techno.  In 2000, the city held the first annual Detroit Electronic Music Festival; this event—later re-structured and re-branded as Movement—represented a formal, and perhaps overdue, acknowledgement of the importance of this distinctly Detroit art form by the city that birthed it, and has since grown to be as much a part of the city’s calendar of beloved events as the Detroit Jazz Fest or the International Freedom Festival.

With such a rich history and interesting cast of personalities, Detroit Techno was ripe for celebration at the Detroit Historical Museum in the early 2000s.  In addition to profiling the key artists, the exhibit also featured a recreation of a basement studio using actual equipment provided by the artists, and a touch screen multi-track music-mixing interactive, which lives on—adjacent to Sanderson’s mixing board—in our current signature exhibition, the Kid Rock Music Lab. 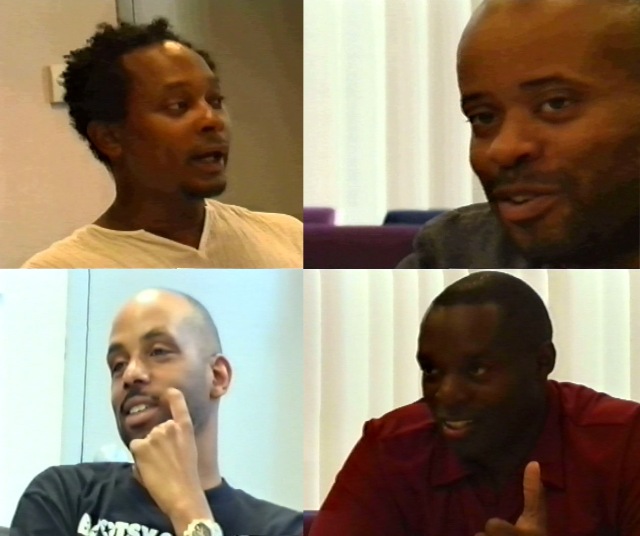 Four architects of Detroit Techno, (clockwise from the upper left) Derrick May, Juan Atkins, Kevin Sanderson, and Eddie Fowlkes, are shown here in conversation at the Detroit Historical Museum.

As part of the lead-up to the 2003 techno exhibit, the Detroit Historical Society sent a camera crew to the 2002 Detroit Electronic Music Festival in Hart Plaza to document the proceedings.  We have recently rediscovered three and a half hours of footage, spanned across a set of four tapes, from this effort, and this material has now been digitized and made public as part of our Detroit Video History Archive.  In these videos, you can find Juan Atkins’ Saturday night D.J. set on the Main stage, Eddie Fowlkes’ Sunday afternoon set, a behind-the-decks view of Kelli “K-Hand” Hand’s set in the D.J. Tower, and part of the Aux Men’s live performance in which they closed out the festival with a series of covers of songs significant to the history of electronic music.  The tapes are also peppered with shots and interviews with festivals attendees and volunteers, as well as interviews with artists like Alan Oldham and Marina Tang, and the event’s producer Carol Marvin.  The centerpiece of the interviews however is a lengthy group interview (captured from two angles) with May, Fowlkes, Sanderson, and Atkins conducted by Sulaiman Mausi of the Detroit Historical Society at the museum.  In the interview, they cover a variety of topics including the exhibit, the music business, and how they met.

If the three and a half hours from the 2002 D.E.M.F. aren’t enough, our Detroit Video History Archive also includes the entirety of the Aux Men’s cover set followed by another performance at the legendary club Motor, and footage of Carl Craig and Silent Phase performing at a San Francisco rave in 1992.