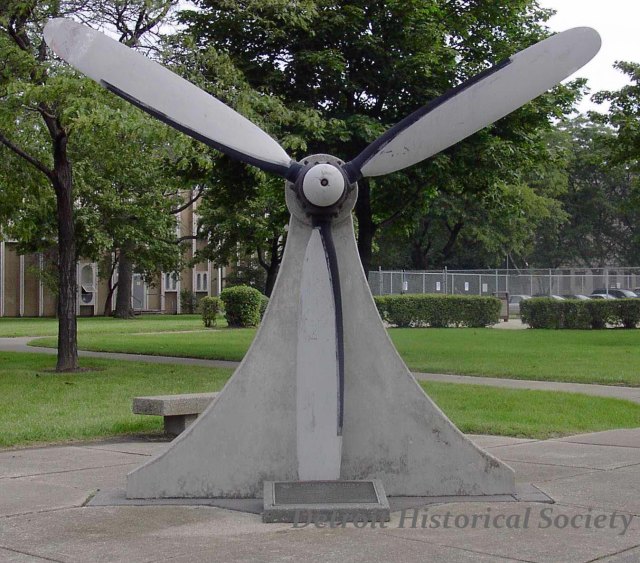 In Mexicantown’s Clark Park, there is a little-known monument shaped like a propeller in honor of Amelia Earhart. The monument sits next to Detroit’s Amelia Earhart Elementary-Middle School. Students at the state-of-the-art building study a curriculum focused on Science, Technology, Engineering, Arts and Math (STEAM). Earhart Elementary students are known as “The Aviators” and their motto is “Where the sky is no limit!” As it turns out, this is not Earhart’s only relation to The Motor City.

Amelia Mary Earhart (1898 – 1937) became one of the earliest female aviators in the 1920’s.  After becoming the first woman to be flown (as a passenger) across the Atlantic in 1928, Ms. Earhart became a celebrity icon and actively promoted herself by publishing books and undertaking lecture tours.  She earned additional funding for her aviation exploits by endorsing such products as luggage, cigarettes, and clothing.  In May, 1932, she became the first female pilot to complete a nonstop solo flight across the Atlantic.

After the fame generated by her transatlantic solo flight, Ms. Earhart was engaged by Detroit’s Hudson Motor Car to launch its new Essex-Terraplane automobile in 1932.  On July 21, over 2,000 car dealers came to Detroit from around the country for the special event, which featured Ms. Earhart christening the new vehicle, reportedly with a bottle of gasoline instead of the traditional champagne.  Each of the dealers on hand was given a Terraplane demonstrator to drive home, resulting in additional national media coverage for the product introduction.

Hudson’s Essex was originally introduced in 1919 as a lower-priced vehicle line.  In 1932, in the midst of the Great Depression, a redesigned Essex was developed and named the Essex-Terraplane (the Essex prefix was subsequently dropped), in order to capture some of the public’s fascination with early aviation.  In an effort to reduce raw material costs, the Terraplane was designed with a shorter wheelbase and a narrower track.  The  auto’s streamlined, aerodynamically-inspired body reinforced the aircraft connotation of the nameplate. A ceremonial car was later presented to airplane inventor Orville Wright.

The Oakland Tribune reported that, as an aviator, Ms. Earhart appreciated the Terraplane’s high power-to-weight ratio and steady high speed handling.  Like Earhart, the Terraplane became a media icon, and later accounted for as much as 75% of Hudson’s sales.  In 1936, bluesman Robert Johnson recorded “Terraplane Blues.”  The song was subsequently covered by other musicians including Eric Clapton and one-time Detroit autoworker John Lee Hooker.