We typically think of urban renewal project happening in the 1950s and ‘60s, but in Detroit plans were already underway in 1944 for postwar improvements. It addresses everything from traffic engineering to swimming pools.

Grab a paddle! If it’s 1946 and you need to find a place in Michigan to canoe than this map will be perfect.

This handy map shows the Detroit Zoo circa 1947. The layout has many similarities to the zoo’s current design almost 70 years later. Of note is the Beer Garden and Monkey Island. 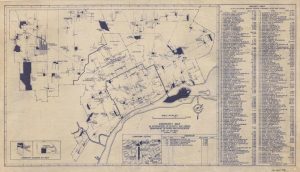 This 1948 map of Department of Parks and Recreation properties is unique in that it highlights properties renamed after Detroit’s war heroes.

The campus of Wayne (State) University was much humbler in 1948 that it is today. With few purpose built academic buildings, most of the properties were still former neighborhood residences which would be replaced by new construction in the following decades.