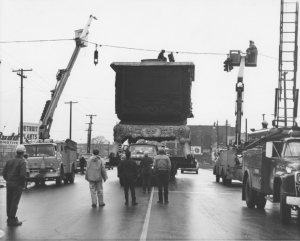 The booms of a fire truck, and a utility company cherry picker truck are being used to lift a traffic signal cable that spans Mack Avenue, as the stove approaches.

Large home appliances are always a pain to move, but be grateful you have never had to move an appliance as big as a team of volunteers did in Detroit in 1965. Prior to the dominance of the auto industry, Detroit was well known as the home to several major stove manufacturers. One of them, the Michigan Stove Company, commissioned the “World’s Largest Stove,” made of 15 tons of hand-carved oak, as their contribution to the 1892 World’s Columbian Exposition in Chicago. Following the fair, the stove was brought to the city to stand as a landmark outside of the Michigan Stove Company’s headquarters at Jefferson Avenue and Adaire Street. After the Michigan Stove Company merged with the Detroit Stove Works in 1927, the stove was moved up the road to the newly formed Detroit-Michigan Stove Company just east of the Douglas MacArthur Bridge to Belle Isle. Unfortunately, in 1955, the shift toward modern gas and electric ranges put the Detroit-Michigan Stove Company out of business. A decade later, when developers expressed interest in the land beneath the stove’s four mighty legs, a coalition of city officials, private companies, and individuals came together to save the landmark.

The Michigan State Fairgrounds were selected as the new home for the stove. The stove, together with the flatbed truck used for the move to this new site, required 27 feet of clearance. An 18-mile route was drawn up for the truck to avoid overpasses and other low-hanging obstructions. Detroit Edison and Michigan Bell workers were included in the stove’s procession to raise and—if necessary—cut low-hanging power and utility lines. The stove left its long-time home at 4:16 a.m. on Sunday, April 11, 1965 to avoid as much traffic as possible. The rather convoluted route took the stove, crawling at about five miles per hour, east on Jefferson to St. Jean Street, then north to Mack Avenue. From there it headed east to Conner Street, on which it stayed until veering west along McNichols Road to Van Dyke Avenue. From Van Dyke it proceeded north to 8 Mile Road. The direct path along 8 Mile to Woodward Avenue was blocked by a railroad overpass, so the route called for the stove to snake around to the Fairgrounds by taking Oakland Street (where I-75 presently runs) south back to McNichols. From there the stove had a clear path west to Woodward, then north to the bus terminal turnaround at the Fairgrounds. After just over nine hours, the stove arrived at the fairgrounds, where it was installed opposite the bus stop. 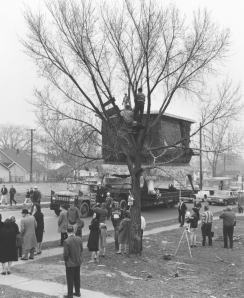 Despite the giant stove’s long trek, it was still not out of harm’s way. By 1974, the then 80-year old wooden monument had fallen into disrepair. It was dismantled and moved away from the elements into storage. Although it was out of view for the next 24 years, the stove never vanished from the hearts of Detroiters. In time for the 150th anniversary of the Michigan State Fair in 1998, a fund raising campaign provided the Detroit Historical Museum the means to restore and reassemble the stove at the fairgrounds. Tragically, after another 13 years of display, the World’s Largest Stove was severely burned after being struck by lightning on August 14, 2011. Pieces of the charred remains were recently displayed in the Detroit Historical Museum. 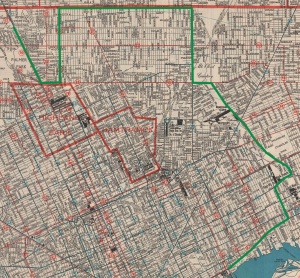 The green line on this map traces the path of the World’s Largest Stove during its 1965 move. Oakland Street, across which the stove traveled south from 8 Mile Road to McNichols during the final leg of its journey, is the current site of a stretch of I-75.

3 thoughts on “Moving Day for the World’s Largest Stove”