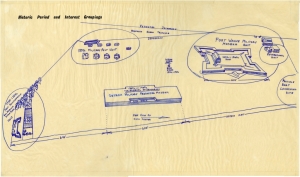 While the proposed Detroit Industrial History Museum at Historic Fort Wayne was to be a significant part of the restoration project, the total project included many other changes to the landscape. Different areas of the grounds were to represent specific historic period and interest groupings, with the Industrial History Museum representing the 1860s-1960s, when the Fort served as a focal point in the Arsenal of Democracy. Other historic periods and interest groups included the 1700s-1750s represented by a reconstructed Fort Pontchartrain and a French strip farm, the 1840s-1860s represented by the Fort itself, the 1890s represented by a military post unit, and the 1890s-1930s represented by a band stand on the parade ground. 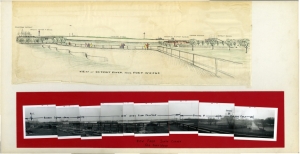 Aside from the demolition, transformation, and construction of new buildings and fortifications, the restoration project also proposed changes to the land at the northern and southern borders of Fort Wayne. West Jefferson Avenue was to be rerouted to accommodate for a new green triangle outside the Fort’s entrance, and a riverfront observation area was to be constructed along the shoreline of the Detroit River, near the Detroit Industrial History Museum.

c. 1965, Drawing showing some of the proposed changes to the park, including the rerouting of West Jefferson Avenue and the construction of a green circle outside the entrance to the Fort.

While none of these proposed changes were ever completed, it is interesting nonetheless to see a representation of how different Historic Fort Wayne could have been, and to imagine new possibilities for its future. If you are interested in checking out more of the Fort Wayne Restoration project drawings, including the demolition plan and a detailed interior of the Detroit Industrial History Museum, you can find them on our online digital collection.