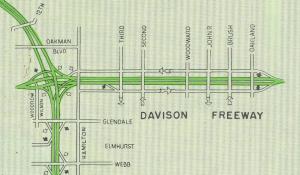 Davison Freeway as it appeared on a 1961 Wayne County highway map.

Although it was only 1.3 miles in length, the Davison Freeway (M-8) was the first below-grade (depressed), limited access freeway to be built in Michigan. In 1940, chronic traffic gridlock in Highland Park provoked officials to devise a new way of moving a high volume of motor vehicles at a high speed across the city. After two years of construction, it opened on November 25, 1942 replacing Davison Avenue. Building the freeway turned out to be a timely decision, because an increase in industry during World War II meant even more cars and trucks travelling on roads in the area. Its design also served as the model for other future Detroit expressways such as the John C. Lodge Freeway (M-10) and Walter P. Chrysler Freeway (I-75).

View of concrete forms and reinforcing bars for bridge at Third Avenue.

The William J. Storen Company of Detroit was one of several contractors on the project and they were responsible for bridge work at John R, Brush, Second, and Third Streets. These photographs were used to document progress on earth excavation, utility relocation, concrete paving, and bridge construction.

It is amazing to note that the original pavement and bridges remained in use for 54 years until the freeway was reconstructed in 1996-97. These images provide a testament to the quality of the workmanship and they remind us of the importance of the underlying infrastructure that we rely on every day in our modern world. All 54 of the Storen Company photos can be viewed as part of our online digital collection. 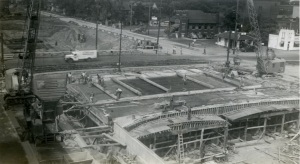 Pouring concrete pavement on the east half of Woodward Avenue bridge deck.