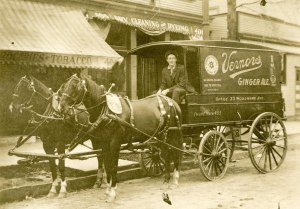 One of Detroit’s favorite businesses was started at the southwest corner of Woodward Avenue and Clifford Street by pharmacist and florist James Vernor in 1866.

Some early stories suggested that he had developed his famous ginger ale before the Civil War. However, later records indicated that he did not begin producing and selling ginger ale at the soda fountain in his store until about 1880. 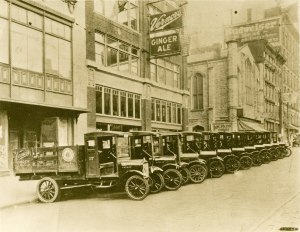 His “Deliciously Different” carbonated beverage was made from a syrup extract of ginger, vanilla, and other natural flavorings that were aged for four years in oak casks. As the drink became more popular, Vernor decided to close the pharmacy and florist shop to concentrate his efforts on the ginger ale business.

In 1896, he opened a new soda fountain and ginger ale factory on the west side of Woodward Avenue just south of Woodbridge Street. The new location was closer to the downtown area and to the busy ferry docks at the foot of Woodward. Vernor continued to expand his factory, which eventually occupied much of the city block. He also opened soda fountains in Flint, Saginaw, Buffalo, Cleveland, Columbus, Cincinnati, Toledo, and several other Midwestern cities. 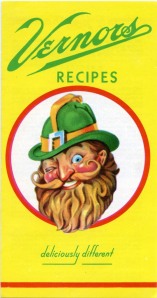 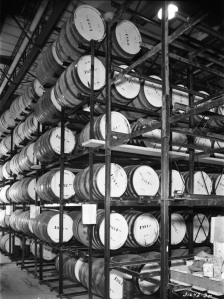 By 1950, the City of Detroit had formulated plans for Cobo Hall and riverfront re-development, and wanted to acquire the Vernor’s factory property. The City and Vernor’s agreed to a land swap where Vernor’s would move north to a parcel located on the west side of Woodward between Canfield and Forest Streets. This new site had previously been the location of the old city Convention Hall. The company built a large, modern factory complex at 4501 Woodward Avenue, which opened in 1954. The new plant included a soda fountain and offered tours. It had large glass windows along Woodward, which allowed pedestrians and motorists to view the huge bottling operations.

Although the Vernor family decided to sell the company in 1966, subsequent owners have continued to produce Vernor’s Ginger Ale, which still maintains a loyal following in Michigan and the Midwest.