All Roads Lead to Delray

The area in the present day shadow of Zug Island may seem like an unlikely location for “the largest building in the world erected exclusively for fair and exposition purposes.” However, in 1889, this was exactly what stood there. The area directly west of Historic Fort Wayne, along the Detroit River, was home to the Detroit International Exposition and Fair of 1889. This spectacle was intended to demonstrate the might of this modern city as the Twentieth Century drew near. The brochure from which the above image was taken touted the city’s accessibility to rail and water, its public gas and electricity consumption, and Detroit industries of the era—packaged seeds, stoves, pharmaceuticals, and tobacco, as evidence of this might. 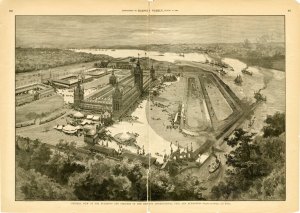 And a mighty city requires a mighty exposition. A supplement in the August 17, 1889 issue of Harper’s Weekly promised that, only a “profession pedestrian” would be able to take in the scope of the event in one day. Luckily for all the amateur ambulists, fair goers were treated to displays of livestock, musicians, a gallery of over 300 paintings, and demonstrations of technological marvels for ten days. And of course there was the exposition’s very regal main building itself, designed by Louis Kamper, fresh from designing the Hecker House at Woodward and Ferry Avenues. Unfortunately the structures did not last long after the exposition’s two more annual occurrences; in 1895 the grounds were razed by the Solvay Process Company, eager to mine the salt beneath. The same access to railroads and waterways that made this area prime for such a grand exposition, coupled with the natural resources beneath also made it fertile for heavy industry, continuing to feed the city’s growth into the 20th century.

3 thoughts on “All Roads Lead to Delray”